One sixth of the world, no access to clean water. 2 million people, dead of waterborne diseases. Every year. Year after year.

Blah blah. Why doesn’t everyone get it? Why are relatively few taking action? Well, we marketing-types live and die by a basic tenet: make your message relevant to the audience, their lives, their world, or risk being ignored. So, Western-worlders, we’ll help you relate better by viscerally putting skanky water into your world! This one, from Wordvision, had me running through the house, slightly nauseated, yelling “WHERE IS MY CHECKBOOK, I NEED IT NOW!” Now that’s persuasive marketing. From www.worldvision.org.uk/water,

In our world we have easy access to toilets. Supposed we take those toilets out of your world? Say, in your favorite 4-star? You can almost smell this spot, and I don’t mean the food. From www.wateraid.org, 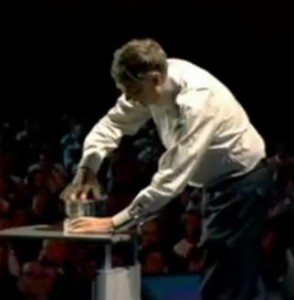 Earlier this month, Bill Gates released a container of mosquitoes at the elite TED (Technology, Entertainment, Design) Conference to make his point about disease and malaria. Now that’s relevancy to audience! “I brought some. Here I’ll let them roam around,” he told the big-shot gathering. “There is no reason only poor people should be infected.” (He waited several minutes before assuring everyone the roaming insects were malaria-free.)

Ready to Rinse Away Your Plastic Waste?

Earth Day Called, They Want Their Symbol Back