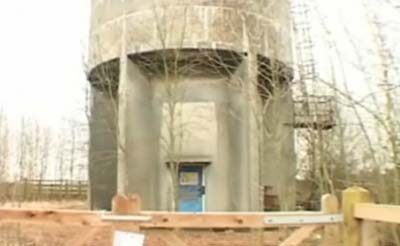 Another opportunity to quench your thirst for one-of-a-kind digs. For £100,000 (that’s about US$135,000) plus renovation expenses, you could turn this abandoned concrete tower into a 4-story monument to to your exceptional design instinct. From the Jan. 16, 2009, Northampton (UK) Chronicle & Echo,

The massive concrete tower in Great Doddington comes with planning permission for a four-storey home on a plot measuring almost a quarter of an acre.

Andrew Kilburn, director of residential sales at estate agents King West in Northampton, said the unusual property in Cut Throat Lane could inspire a renovation like those on Channel 4’s Grand Designs show.

He said: “Anything that is unusual, we have to pitch a figure that will generate interest.

“Ultimately, what we are selling here isn’t a terrible-looking building, we’re selling the concept of what it could be. There aren’t too many of them around and I do recall on Grand Designs there was a water tower that was converted and featured.

The plans for the circular structure include two bedrooms on the ground and first floor, kitchen on the third floor and a roof extension for the lounge.

Cut Throat Lane?! I think that adds $20K in value by itself! The photo here is a capture from a wildly entertaining video on the same topic at bbc.com. Watch the BBC Video.

Profits are Up for Ypsilanti Water Tower Photog

Another Reason I'm an Anglophile

If I Could Place Ads on a Bottle

Man and Beast are Crazy with Heat

We're Crushed. Really, We Are.

Soak Up The View From This Fab Garden Bench

Educating the Public on Water Issues Be not ignoring warnings, you Americans
Scroll to top